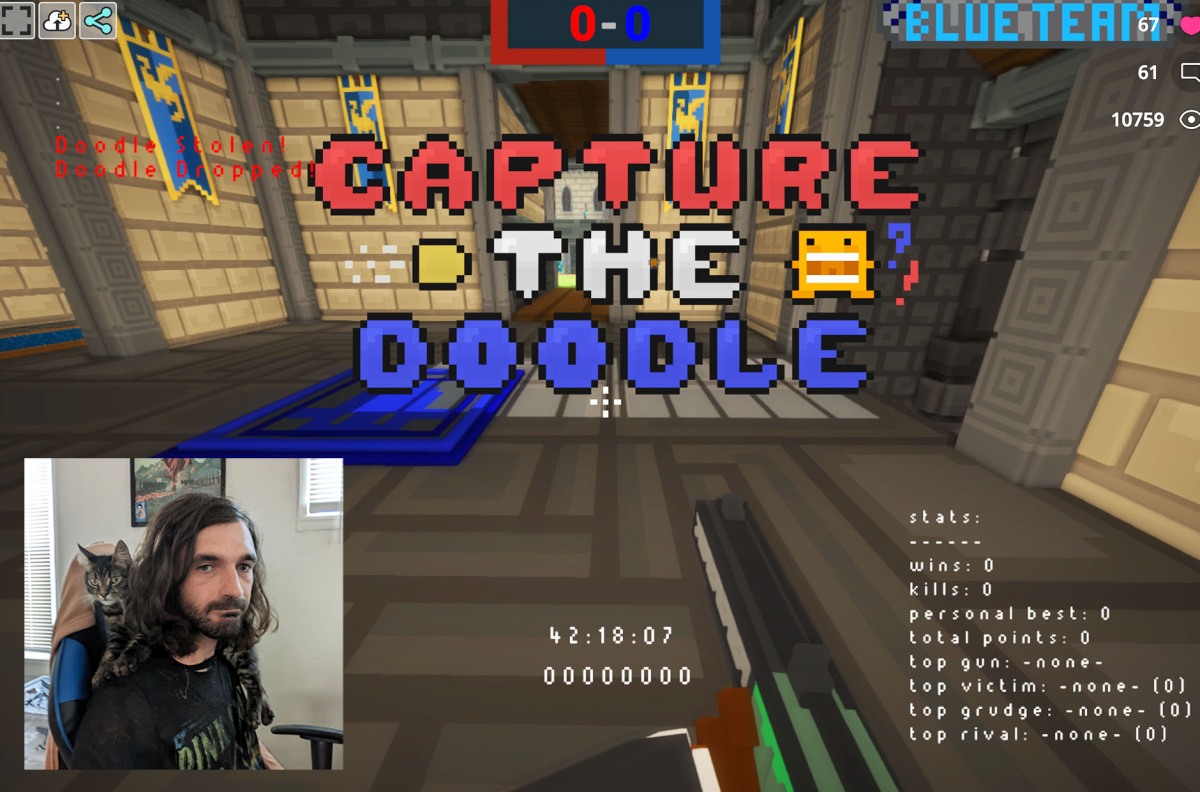 Bill Costello is an LA-based Community Engineer who started working on dot big bang in late 2020. His work includes making new games—such as the recently published Capture The Doodle—and helping out dbb players and creators on Discord, where he’s better known as JordiLaForge. We caught up with him to find out more.

Can you describe what you do at dot big bang?
I am a Community Engineer, which means I’m responsible for creating fun games for everyone to play, as well as helping community members create their own experiences. I also create tutorial content for those learning the ropes.

What’s an interesting aspect of your work?
Getting to see all the cool things people make is one of my favorite parts. The creativity of the community is really amazing, and I love seeing all the different ways people decide to use the platform.

What excites you most about working on the platform?
Dot big bang provides the best feedback loop during the creation process out of any engine I’ve used. Being able to instantly see and test your changes with other people really makes the process a lot more fun to go through. I still have nightmares about waiting days for Source engine to compile lighting after the smallest of changes.

You recently finished and published Capture The Doodle – could you tell us about the game?
Capture the Doodle is a team-based capture the flag-inspired shooter based on the default shooter starter game, that everyone has access to when they click Build a World. It draws a lot of inspiration from the early Halo series, and I tried to make it as frantic as possible. It’s tons of fun, if I may say so myself.

What was an obstacle that cropped during development?
Getting the throw physics just right took a lot of effort. I believe I rewrote the entire system three or four times before I was satisfied with the feel of tossing the Doodle around.

And a pleasant surprise?
Once you understand it, the networking model for the platform is really easy to use! Normally dealing with client synchronization can be a real rat’s nest, but dot big bang made it a breeze.

What community-made games or objects caught your eye recently? What did you like about them?
The voxel objects that Neoshard has been making have been great and all really well made. It’s been a lot of fun watching their improvements as they get used to the platform as well.

Do you have a piece of advice for someone looking to work in your field of video games?
Never stop learning! You don’t need to have a job in the industry to learn what you need to know, just get out there and start having fun building things. Those experiences will pay off tenfold later on, and nothing beats real experience as a foundation for getting started professionally, if that is your goal.

What are you playing at the moment, outside of dbb?
Monster Hunter Rise! The new expansion is just wonderful, and I can’t get enough of their brilliant moveset and enemy design.

Do you have a closing message, for the people?
Go out there and make stuff, don’t let your dreams be memes..

You can play Capture The Doodle, follow Bill’s work on his dot big bang profile, and chat to him and the other Community Engineers on Discord. Read more Meet the Devs interviews here.

One thought on “Meet The Devs: Bill Costello, Community Engineer”